The Significance Of Onam 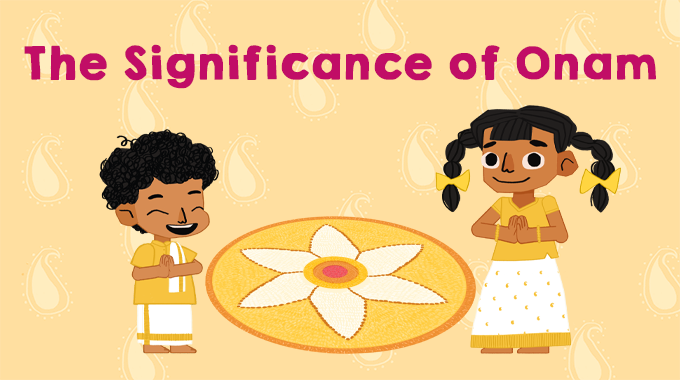 The only thing about Onam that everybody seems to know is that it is a festival celebrated in Kerala. Some people can vaguely associate it with boat races, or “Pookalam” or even the famous Sadhya! Then again, what is the story behind Onam?

The Story behind Onam

In ancient India, Prahalada was revered as a great devotee of Lord Vishnu. Prahalada's grandson, Maha Bali, was a wise king who valued knowledge. One day, when he was performing a yagna, a short young, radiant boy entered the yagna shala. Maha Bali welcomed this radiant youngster and asked him what he wanted. The young boy requested for that much space, as could be measured by three footsteps of his.

Maha Bali agreed at once, despite his Guru Shukracharya cautioning him that the guest was none other than Lord Vishnu Himself.

King Maha Bali then joyfully offered his own head for the third step in utter devotion and surrender.

The Lord, recognizing his attitude of surrender, blessed him and sent him to Pathala or the underworld, by stepping on him! Mahabali’s loyal citizens begged Lord Vishnu to let Maha Bali visit them at least!

Acceding to the request of Maha Bali’s people, Vishnu granted Maha Bali permission to return to his kingdom from Pathala, once every year, to be in the midst of his people. This day is celebrated as the Onam festival.

Now that we know the story of Onam, let's talk about celebrating Onam.

Onam is also known as a harvest festival. Aesthetically laid out flower designs in front of every house with a variety of colourful flowers called pookalam, evokes a sense of plentitude and prosperity. Again, this is what Onam stands for. Women adorn themselves with gold ornaments and new clothes, in the spirit of Onam. Every bit of the Onam celebration is a nostalgic reminder of the bygone glory of the past, during King Maha Bali’s reign.

The sumptuous sadya is an elaborate feast with around 24 different dishes that is served during Onam.

This is followed by kaikottikali ( a graceful dance), Tumbi tullal and other folk performances like kummatikali and Puli Kali. Puli Kali is one of the most popular dance forms and involves men dressing up as tigers and performing for the audience’s entertainment!

The most commonly known event during the Onam period is the infamous boat race. Men and women participate in a boat race every year. The most popular boat races are :

These races have families that work together to make the boat as well as race it! It is considered an honor to be selected as a representative of your group at the race.

You can watch this episode Kutu and Ki “Onam is here!” to watch Kutu and Ki celebrate Onam!