What does Lord Ganesha Symbolize? 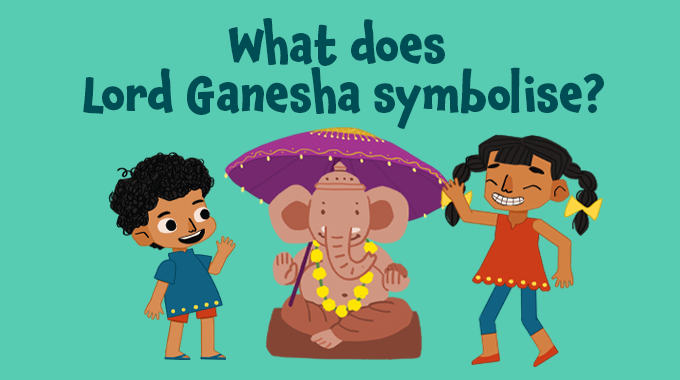 Ganesha is the formless Divinity - encapsulated in a magnificent form, for the benefit of the devotee. As per Hindu mythology, he is the son of Lord Shiva and Goddess Parvati.

Goddess Parvati created Lord Ganesha from the dirt on her body, and she asked him to keep guard while she bathed. Lord Shiva came by unannounced and Ganesha who had just been created, failed to recognize him and obstructed his path. Lord Shiva was infuriated and chopped off the boy's head. Parvati was shocked when she saw this! She explained to Shiva that the boy was their son and pleaded with Shiva to save him. Shiva immediately instructed his helpers to go and get the head of someone who was sleeping with their head pointing towards the north. The helpers got the head of an elephant, which Shiva affixed to the boy's torso and Ganesha was born!

Every single part of Ganesha’s body is a lesson in itself. From his big tummy and ears to his single tusk and even the mouse that he rides, let's learn the significance of every part and what you can take away from it.

The big ears and small mouth indicate the importance of listening skills. It symbolizes that while you hear everything, pay attention to  every detail. Good listening skills will help make learning much easier. The small mouth tells us to speak less. We should lend our ears to everything, but obtain only what is needed and throw away the unnecessary. Basically, big ears and a small  mouth symbolizes what all our teachers have been telling us - “talk less, listen more”.

The broken Tusk of the Lord is a sign of hardwork and sacrifice. The broken tusk has a story which goes like this: when Sage Ved Vyasa came up with the idea of writing Mahabharata, he looked around for someone who would write down the words as he recited them. He approached Lord Ganesha and said “I will narrate the story and you must take it down as fast as I say it and you must not interrupt me or stop anywhere in between'' to which Lord Ganesha agreed and replied with his own condition “I can do so only if you don’t halt or hesitate. If  you do, I will stop writing and your epic will remain unfinished”. Ved Vyasa agreed with Ganesha’s condition and they began writing the epic. Ganesha’s quill could not keep up with his ferocious writing and it broke. Since he could not stop or take a break to get another quill, he broke one of his tusks and used that instead.

The large belly symbolizes his ability to be able to ‘digest’ both the good and bad in life. You must be ready to face all pleasant and unpleasant experiences in your life with patience and calmness. Hostility, disappointments, hardships and resentment – we have to digest them in order to move on to better pastures of life.

His Big Head has all the knowledge of the universe within it. We’ve been conditioned to think small, simplify, not to be greedy, and to overall expect less and demand less from life. But, Ganesha’s Big Head is about big thoughts and big achievements. In our lives, if we cannot think big, we will never achieve big success. So the big head of Lord Ganesha depicts – think big and you shall achieve big.

5. Ganesha, the elephant-headed God travels on something as small as a mouse?

Lord Ganesha with such a huge body has a small mouse for his vehicle. It shows that Lord Ganesha has absolutely no ego. Ganesha’s modesty does not permit him to consider the mouse to be insignificant; instead he realized the advantages that the mouse can offer him. Ganesha teaches us to respect everything, regardless of whether it is big or small. It is only when you shed your ego, do you notice the advantages of even the smallest things.

With Ganesh Chaturthi coming up, teach your little ones the significance of Lord Ganesha’s body and the values that they symbolize. Also head to the Kutuki Store and check out our Ganesh Chaturthi Sale! This sale includes :

5 activities to engage your child during Dussehra!
September 28, 2022
The Significance Of Onam
September 8, 2022
10 ways to make learning fun with Flashcards
September 5, 2022